Some guys give their wives flowers or jewellery as a sign of affection.  George Boldt gave his wife a castle.

Boldt made his fortune in the hotel business catering to the wealthy in New York City and Philadelphia. George and Louise loved the Thousand Islands in upstate New York and enjoyed vacationing there. In 1900,  Boldt started a project to build a castle on Heart Island as a gift to his wife. The result was Boldt Castle. Sadly, Louise passed away in 1904 before the castle was fully completed.

I cannot afford to build a castle for my wife, Sandy but could afford to take her to the 1000 Islands Harbor Hotel.   The hotel is located in Clayton New York right along the St. Lawrence River.  It is also only about a fifteen minute drive to Alexandria Bay where you can get a shuttle boat to Boldt Castle.

We arrived at the hotel hungry and ready for supper.  Fortunately, the hotel restaurant, the Seaway Grille was still open.  I ordered the seafood scampi while Sandy and our son, David chose the hamburgers.   The restaurant offers amazing views of the St. Lawrence River. I enjoyed my seafood scampi while watching huge ocean freighters go by.  We also saw numerous fly-fisherman hoping to catch the big one. It felt like we could have been along the coast of the Atlantic or Pacific.

Once we finished our meals, we still had space for dessert.   Our friendly server brought out the dessert tray with David and I choosing the key lime pie and Sandy opting for the chocolate and peanut butter cake.  Both desserts were delectable with all of us sharing.

After such a delicious meal, we all needed to go for a walk.  Just outside the grounds of the hotel was a public pathway along the river.   Our first stop was at a statue of a giant muskie fish. Clayton has been a top vacation spot for the past hundred years.   Boating and fishing along the St. Lawrence have always been the top draws. Muskie fishing is still a popular pastime with catch and release being highly encouraged.   David loved posing with the muskie and imagined catching one of his own.

We also strolled through the downtown.    Musicians were playing at a number of pubs, coffee shops were open late and there was generally just a festive atmosphere.  I love visiting towns that still have a vibrant downtown. Clayton has done a wonderful job of preserving their heritage buildings and finding new uses for those buildings.

It was time for us to return to our hotel room.  The hotel staff had thoughtfully left us chocolate-covered strawberries.  David could have polished off the entire plate if we would have let him!

The next morning, we were treated to a beautiful view of the St. Lawrence from our hotel room window.   I thought I could certainly get used to this river living.

We had a delicious traditional breakfast of bacon and eggs at the Seaway Grille and were ready to start our day.   On tap, was a visit to Boldt Castle.  Since Boldt Castle is located on an island,  it is necessary to take a boat to visit it. We opted for the shuttle boat operated out of Alexandria Bay by Uncle Sam Boat Tours.  After a short ten minute boat ride, we were on the island. 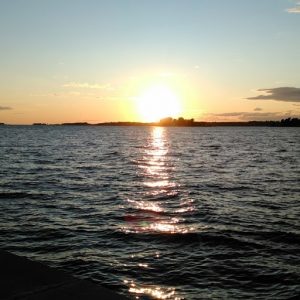 The interior and exterior of the castle were both impressive.   A number of rooms have been renovated including the dining room and George Boldt’s bedroom.  Heart-shaped motifs were found on the outside of the building as a symbol of love George had for his wife.

The castle is still a work in progress with rooms on the higher floors still under renovation.  I liked the fact that the castle did not hide their renovation work and kept the space open for the public to see.

The outside grounds were equally as impressive.  Floral gardens were interspersed with manicured lawns.   I kept thinking that if someone was ship-wrecked, Boldt Castle would be a wonderful place for it to occur.

We also chose to visit the Yacht House.  We took a short pontoon boat ride to the Yacht house which is located on Wellsley Island.  This is where Boldt would keep his boats some of which looked as expensive as our house.

We hopped on the pontoon ride back to Boldt Castle and then to our shuttle boat back to Alexandria Bay.   After visiting the castle, I am concerned that Sandy might ask for a castle for her next birthday or anniversary!

We finished off our day by crossing the border and having a delicious meal from Don’s Fish and Chips in Brockville.  We may not have the money of George Boldt, but I still think our family knows how to live like royalty.

If you go – 1000 Islands Harbour Hotel is located about two hours from Ottawa.  Remember to bring your passport. It is also worth to spend time in Clayton. There is an excellent antique boat museum, fishing charters and live entertainment at the Clayton Opera House.

This entry was posted in Community and tagged Boldt Castle. Bookmark the permalink.