Respect; You get what you give 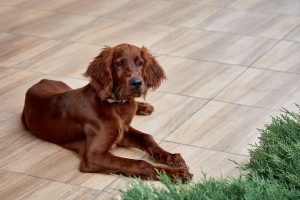 As soon as Marnie, my Irish Setter, and I returned home after finishing a few errands, she raised her head and sniffed the air. Then she ran around, barking as she checked every room, looking for the stranger that she sensed/scented had been there while we were out.

I knew from her reaction that we had had a visitor — in this case, a technician repairing my husband’s lift chair. But I would not have known unless Marnie had told me, as there was no other sign to a mere human that anyone had come into the house while we were away. To Marnie, for whom every human has a unique scent, it was clear that an intruder had entered, and it was her duty to protect her people by checking the territory.

This is just one example of why we should listen to our animals and respect their reactions.

A dog’s nose knows, every time. A dog’s sense of smell is around 100,000 times better than that of a human being. This is partly because a dog’s nose has some 300 million olfactory receptors, while the human nose has just six million. The dog brain also has an area about 40 times larger than the human area devoted to analyzing smells. Recent research in Hungary and Sweden has also focused on a type of infrared sensor at the tip of dog noses that makes it possible for them to detect minute temperature changes when other animals (including the two-legged variety) are nearby.

No wonder, then, that a dog exercises that super-sensitive organ as he enjoys smelling the roses, reading the “pee mail” and checking every other interesting scent along the way on those eagerly anticipated dog walks. Dogs read the world through their sense of smell more than they do with their eyes and they leave messages for the canines that come later to check out their urine.

Therefore, dogs must be given the time not only to eliminate their waste, but also to read the information to be found all over the park, around every tree or post and along every sidewalk or wall. So, respect for your dog means allowing him the time to check various smells and to pee in peace. No dragging on the leash because you are bored or ignoring your pet’s needs because you are staring at your cellphone rather than sharing your special time with Fido.

He’s the one who senses when you are afraid, anxious or sad. He’s there to protect you when you’re in danger and to comfort you when you’re depressed. He shares in your joy when you’re happy. So, it’s your duty to share in his special time of day by giving him your full attention.

Like dogs, cats have a highly developed sense of smell. This is why the cleanest cat is repelled by a less-than-pristine litter box and may even do more than think outside the box. They are also even keener than dogs to establish a consistent routine in terms of mealtimes, exercise (inside or outside, depending on whether or not they have access to the great outdoors),playtime and rest periods. While dogs have their preferences, they are usually obliging about adapting to changes in their person’s routine because being with the person is of primary importance. Cats, meanwhile, no matter how affectionate, are very much creatures of habit.

Like dogs, they communicate equally effectively by vocalization and body language, but their signals do not always have the same meaning as a similar action from a dog. For example, it is generally understood that a wag of the tail from a dog indicates pleasure. However, a similar movement in a cat’s tail speaks of conflict. A cat standing at the door may be asking to go out until she feels cold air and rain when the door is opened. The tail wags faster as she tries to decide whether to brave the weather or stay in the warm.

Understanding the body language and varying sounds is very much part of a respectful relationship with any pet. The cat that rubs against you, usually tipping her head against your leg, is doing more than showing affection, for example. She is exchanging scents with you, an important part of the greeting ritual for her.

It is also up to the cat’s human to respect her natural instincts to keep feline and person happy. That means ensuring the cat has access to an inviting scratching post (so saving the furniture) and interesting toys and interactive play (so cutting down on kitty boredom and possible destructive behaviour) and some comfortable places to perch.

Offering this level of understanding and respect will undoubtedly result in a positive reaction from a contented cat. She may well blow you kisses, demonstrated by slow blinks that indicate she likes and trusts you. Blink back and you make the relationship even closer. Simply put, learning their language and respecting their meaning and their instincts is the road to a close understanding and a fulfilling relationship with your pets.

Almonte, Ontario writer, Iris Winston, is a former Executive Director of the Canadian Federation of Humane Societies. She has been an
animal lover all her life. Her pets have always been important members of her family

This entry was posted in Family. Bookmark the permalink.